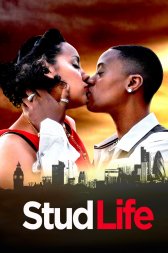 Stud Life
UK, 2012, 91 minutes, SD LGBT, Romance
An interesting movie on LGBT life set in London, this may not be a really fresh plot but it engrosses viewers with the unconventional ideas it comes up to. T'nia Miller as JJ the black lesbian who's the central character in this film is stellar in her performance and Kyle Treslove as her gay best friend shines through. The rest of the cast were commendable enough like Robyn Kerr as Elle, JJ's love interest and Simon Savory (Filmdoo's very own!)  as Smack Jack.  An interesting element in this movie would be JJ's vlogs, used as an outlet for her to express emotions and that last scene, where she talks a little about true love, I guess, is quite fitting for one grand and final conclusion, as a way to wrap up the whole film. An engrossing movie by director Campbell Ex, known for her role as a leading creator of modern British queer cinema. A must-watch especially for fans of the LGBT genre.
Like this Review?
Write your own review?
DooVOTE
Not for me
Like this Review?
Write your own review?
COMMENTS 0
Your Comment...
LIKES 1
blacksnakemoan
blacksnakemoan