Image from: At Home Among Strangers, a Stranger Among His Own (1974) 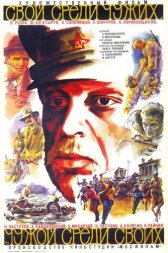 At Home Among Strangers, a Stranger Among His Own
Russia, 1974, 97 minutes, SD Action, Drama
I saw very strong indications of a western flick in this one and maybe it could well fit into an eastern type of movie, a sort of Soviet counterpart for the popular English western films complete with horses, gunfights, robberies, prairies and etc., minus the Indians of course. This is an action drama genre but I found some lighthearted scenes that are quite comedic, especially in the earlier part of the film. I also appreciated the fact that some negative elements present in the usual action films like bloody brawls and sex scenes aren't featured here, which I'd say, was a relief.  Cinematography was impressive and Director N. Mikhalkov always delivers, and whatever genre it may be, he puts his own stamp and personal style to it. I've seen some of his films like Family Relations and Without Witnesses, which are not action genre types at all but viewers could deliberately sense a Mikhalkov feel and style that's observed in the majority of his scenes. A true film connoisseur indeed!
Like this Review?
Write your own review?
Add to List
Not for me
Like this Review?
Write your own review?
COMMENTS 0
Your Comment...