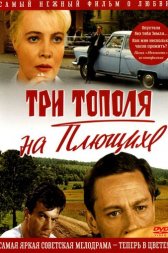 Three Poplars on Plyuschikha Street
Russia, 1967, 79 minutes, SD Drama, Romance, Arthouse
This film gives us a glimpse of Russian countryside and Moscow in the '60s. The cast were quite impressive in their acting performance but it was the lead character of Nyura who shines through, mostly because of her energy, love for music and being true to herself. But the film also gives viewers the feeling that deep inside she's a lonely woman as the husband seems to be aloof and unmindful of her. Director Lioznova makes full use of great musical scoring and the songs have deep meanings but more so, for a penchant of close up shots that magnify the emotions of the lead characters. Engrossing to watch!
Like this Review?
Write your own review?
Add to List
Not for me
Like this Review?
Write your own review?
COMMENTS 0
Your Comment...