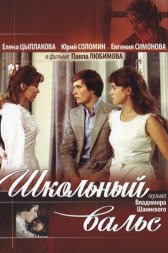 The School Waltz
Russia, 1977, 96 minutes, SD Romance, Drama, Coming of Age
The piano pieces and music provided in this film are all excellent, as they seem to heighten the mood of a particular scene or give clarity to a character's emotion. The actress who plays Zosya delivers a compelling performance,  the acting was natural and her youthfulness transcends into one of inner-strength, resilience and determination. Zosya as a character has depth and she's a young woman, who, despite of her faults really relied on her father and mother for strength, even as the parents have separated.  While I deeply commend the character of Zosya, I have nothing but remorse and pity for Gosha who just can't accept responsibility, he's someone with no balls!  Salute to Zosya for deciding not to pursue him,  she's a strong woman who can live by without him. The character that's to be pitied with is  Dina, who, because of her love for Gosha went on to marry him despite of his disgust. The result, she suffered the consequences of a loveless marriage. For me, this is a film that has a story to tell and powerful messages to convey; of a woman's strength,  a man's folly and another woman's madness. This is a film worth checking out!
Like this Review?
Write your own review?
Add to List
Not for me
Like this Review?
Write your own review?
COMMENTS 2
Your Comment...