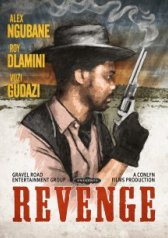 Revenge
South Africa, 1986, 55 minutes, HD Western, African
Amidst the violence that the bad guys did to the family of the lead character, I was quite amused because upon their departure they were making queer sounds which reminds viewers of the noises made by warrior Indians when the guys are in fact dressed in cowboy costumes. There was a moment of confusion for viewers, I guess.  The role of the old man/good samaritan was important because it was he who taught the lead character some shooting skills that will help him in exacting vengeance. Acting performances of some of the bad guys were not quite convincing, even the leader has some confusing expressions even during the fight scenes.
Like this Review?
Write your own review?
Add to List
Not for me
Like this Review?
Write your own review?
COMMENTS 0
Your Comment...