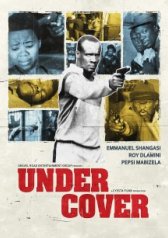 Under Cover
South Africa, 1985, 68 minutes, SD Crime, African
The movie is about a cop named Jakalasi  who goes undercover in order to infiltrate the place of a mob leader and while he seems to succeed at first to gain the trust of the man he was ultimately discovered by one of the mob boss' men. To make things worst, Princess, Jakalasi's girlfriend gets kidnapped by the bad guys and he had to act fast or else it would be too late. I noticed that the topic of kidnappings has been constantly used in some of the African films I've seen,  this seems to be one of the famous topics during such era locally. Nevertheless,  the actors are commendable in their performances especially the lead actor who played the role of Jakalasi. He can be serious but can also be comedic and he's energetic and quick in his actions, suited for the cop character he's portraying.
Like this Review?
Write your own review?
Add to List
Not for me
Like this Review?
Write your own review?
COMMENTS 0
Your Comment...