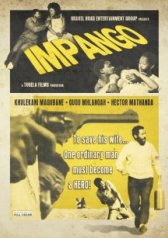 Impango
South Africa, 1985, 81 minutes, SD Crime, African
Pleasantly surprised to find Mr. Toothless here, where he plays a bad guy. I've seen him in another African film but in there he was hilarious compared in this movie where he seems ruthless and I think he's much more effective as a comedian instead of a bad guy. The scenes are fast-paced and the scene where the husband gives the ransom money to the goons was quite suspenseful, too!  An engaging film by Director Tonie Van Der Merwe.
Like this Review?
Write your own review?
Add to List
Not for me
Like this Review?
Write your own review?
COMMENTS 0
Your Comment...