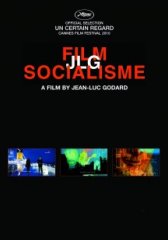 Film Socialism
France, 2010, 102 minutes, SD Drama, Arthouse
The epic Jean Luc Godard challenges and provokes audiences with this film, as he always does.  Visually interesting as it's in digital format,  it's divided into three parts: Such Things takes place in a cruise ship and viewers are treated to some usual activities onboard one, with a myriad of different personalities and a cameo role of singer Patti Smith; Our Europe happens in a gas station which shows children with  parents who are summoned to the "tribunal of childhood"; and, lastly, Our Humanities which features places like Greece, Naples, Barcelona and Egypt, among others. This film was  highly praised by critics although general viewers have mixed reactions to it, especially those unfamiliar with Godard's film-making styles. Ever known for his playful inventiveness in his films,  this is another Godard movie that  shouldn't be missed!
Like this Review?
Write your own review?
DooVOTE
Not for me
Like this Review?
Write your own review?
COMMENTS 0
Your Comment...