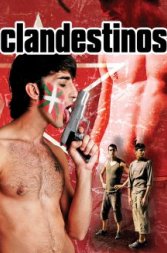 Clandestinos
Spain, 2008, 81 minutes, SD Drama, LGBT
My friends and I watched this film and they remarked that the plot was unconvincing. For me though I liked the by-line which says "you don't have to be straight to be a terrorist". I don't condone terrorism in any way but I'd have to say this film made a quite queer twist to issues like terrorism and gave it an added flavor of gay May-December-affair-style romance. Rodriguez as Xabi was rebellious and has a warrior streak but deep inside longing for love and affection, hence the quest to be reunited with the much older Inaki.  Surprisingly though,  Xabi eventually falls for another elder man,  German, portrayed by TV, stage and film actor Juan Luis Gallardo, with the latter playing German with finesse and conviction.  Nonetheless, this film has comic undertones and also tackles friendship between three young men.  Do give this a watch!
Like this Review?
Write your own review?
DooVOTE
Not for me
Like this Review?
Write your own review?
COMMENTS 0
Your Comment...