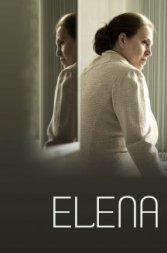 Elena
Russia, 2011, 109 minutes, HD Drama, Arthouse
The statement, "does the end justify the means", clings to me like glue when I viewed this film. Powerful and compelling, this film provides an intricate look at family relations in post-socialist Russia and viewers can sense Elena's devotion to Vladimir as well as to her son and his family. Nevertheless, viewers can sense Vladimir's annoyance towards Elena's  son and family as well as his devotion to his spoiled daughter. It's evident that both Vladimir and Elena have the same reasons where it concerns their children and in one way they are at fault,  by over-indulging their children and thereby suffereing the consequences. Nadezhda Markina, who was recognized with Best Actress awards in this film, shines as Elena in this film about the family conflicts and issues and of up to what extent will someone do to preserve her cherished family. Elena Lyadova, who plays Vladimir's daughter Katerina, reeking with sarcasm when facing Elena, was commendable in her acting portrayal and so goes with Andrey Smirnov who plays Vladimir.  It's a tug-of-war between two camps and a movie that could spark an ethical debate, do check this out!
Like this Review?
Write your own review?
DooVOTE
Not for me
Like this Review?
Write your own review?
COMMENTS 0
Your Comment...