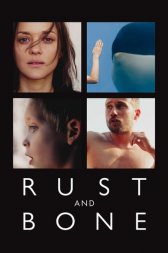 This is a powerful drama of human struggles with strong characters that acutely portray the complexities of human nature. We are given a view of man reduced to an animalistic level where he fights for survival against what nature and society throw at him. Stéphanie’s (Cottillard) life changes when she has a devastating accident at work and Alain (Schoenaerts), a single father with no stable form of employment, is constantly fighting for survival for himself and for his young son. When two people, each with their own problems, unite, life takes on a new dimension and we can see how powerful human contact can be.

The strength of the character of Alain is in his reserve, and yet we never doubt what his interior monologue is saying. His facial expressions and his silences say more than what words, which can often be so fickle, could say. During his struggles we follow him through France and through various jobs that unsettle our perceptions of what is right and wrong. If the motive is honest, who are we to judge? Family, lovers, friends and the self are aspects of life that uncomfortably sit side by side, jostling for attention, in spite of ourselves.

The difficult situations that Stéphanie and Alain face may seem extreme but we can nonetheless relate to their personal journeys, since we all have to cope in our own ways with what life throws at us.