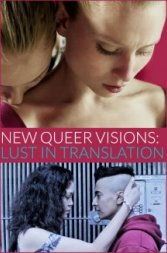 New Queer Visions: Lust in Translation
Cambodia, UK, USA, Belgium, South Africa, 2015, 107 minutes, HD LGBT, Compilation
Impressive collection of short films from up and coming filmmakers!  Particularly liked the film "SHIMI", which was set in the world of ballet and ballerinas,  for the surreal scenes and the predominant use of the red shade in those scenes where Keely  sheds her inhibitions. There's this particular scene that's artsy yet vague, the one where a naked woman, with her back on the camera, was seen with  pairs of hand inching through her body, as well as hands and arms seen on the foreground. Unfortunately for Keely she is drawn into a world of dread, a world of drugs, sex and addictions upon the influence of Mairi. What I liked though was that, toward the end, the lead character Keely came to a realization and resolution and the film ended on a positive note. An impressive work from film maker Kate Maveau!
Like this Review?
Write your own review?
Add to List
Not for me
Like this Review?
Write your own review?
COMMENTS 0
Your Comment...