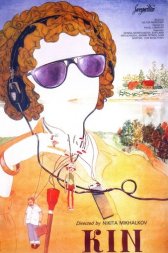 Kinfolk
Russia, 1981, 98 minutes, SD Comedy, Drama
Uniquely funny and engaging to watch! This film gives us a peek into the life of a Russian countryside mother visiting her daughter and family in the city. Nonna Mordyukova portrays the role of the mother who can't really seem to fit in and who tries her best to patch things up between her daughter and son in law. A brilliant actress, she stood out in her role: insanely funny,  big-hearted and naive where it comes to city life. She has been included as one of the top 20 actresses of the 20th century by the editorial board of the British "Who is Who Encyclopedia" and already won a Stalin Prize for the 1949 movie "The Young Guard", which was her debut film. Indeed, a well-respected actress of her generation. Commendable performances by the rest of the cast, making this film one of the hit Russian films in the '80s. Do check this out and for sure you won't stop laughing either during the funny scenes!
Like this Review?
Write your own review?
Add to List
Not for me
Like this Review?
Write your own review?
COMMENTS 0
Your Comment...