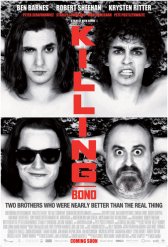 Based on a true story and set against the backdrop of pulse-pounding post-punk, “Killing Bono” is the laugh-out-loud story of two brothers who never quite found what they were looking for.

In 1976, brothers Neil (Ben Barnes) and Ivan McCormick (Robert Sheehan) decide to form a band. Unfortunately for them, their classmates, led by a pint-sized vocalist who calls himself Bono (Martin McCann), had the same idea. While the McCormicks struggle to break out of club gigs, U2 conquer charts and stadiums across the world, and Neil becomes dangerously desperate to keep up with the singer he called his friend.

Sheehan joins the impeccably accented Barnes in a portrayal of the bright-eye McCormick duo, who face endless misadventures and miss chances in their quest for stardom. Barnes perfectly balances charisma with arrogance as the self-sabotaging Neil, whose insufferable pride makes it very hard to feel sorry for his misfortune, but makes it very easy to laugh at him. Sheehan positively shines as Ivan, the younger, more down-to-earth, and far more likeable McCormick. Supporting players include the charming Martin McCann as the eponymous frontman, and the late Pete Postlethwaite in his final, hysterical performance as Karl, a part written specially for him.

Music lovers will love this film. Killing Bono boasts a killer soundtrack of rock hits and original songs performed by the cast. It perfectly captures the sweaty, claustrophobic euphoria of concerts, and pokes fun at the drugged-up decadence and thin glamour of the music business. The costumes are steadily growing more and more embarrassing, and Neil shows off some spectacularly bad dancing skills (ah, the eighties).

While undoubtedly a comedy, Killing Bono takes a dark turn in its final acts when the depths of Neil’s bitterness come to light. This is more than a movie about music- it’s a story of jealousy, brotherhood and dreams not coming true.