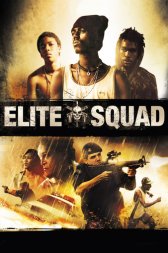 This film, the first in a series, follows the work of the Batalhão de Operacões Policiais Esperciais (BOPE), the Special Operations Force in Rio de Janeiro’s military police, whose main role is to try and establish some sort of order in the favelas. There is constant war between these men and the drug lords who effectively run the favelas. Padilha’s semi-fictional crime film traces the psychology of the narrator, Captain Roberto Nascimento (Wagner Moura) and his struggle to reconcile his professional life with his personal life. The person he wants to be for his family is far removed from the man he has to be when training the new BOPE cadets, who he is choosing to replace him as he is no longer able to stand the position himself.

The complexities of the justice system in Brazil are highlighted through the naïve gaze of the new cadets who have great hopes of fighting crime and yet are faced with police corruption and hypocrisies. Loyalty and allying yourself correctly are key to survival and simply being in the wrong place at the wrong time will prove fatal in this world where life is given such little value.

Identifying with the narrator, we are given an insight into how difficult it is to know what is right and wrong in the murky drug trafficking world of Brazil’s favelas. The issues raised meant the film struck a chord with Brazilians, proving hugely popular, and its sequel even more so. This film is well worth a watch for people unfamiliar with Brazilian culture so we can begin to appreciate the challenges that the country faces.