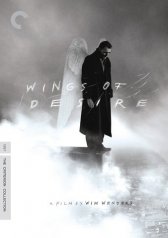 Wim Wenders’ much acclaimed fantasy Wings of Desire (original title: “Der Himmel über Berlin”) is, at least at first glance, just the sort of challenging and ‘artsy’ film that tends to alienate the casual film fan from classic European cinema. It’s a ‘mood piece’, it’s a ‘meditation’, it’s ‘poetry’. It also happens to be a tenderly crafted, spellbinding work that inspires a genuine appreciation for the everyday occurrences that make up life.

Bruno Ganz, a terrific actor most widely seen today portraying Adolf Hitler in the meme-inspiring “Downfall”, plays Damiel, an inquisitive angel wandering around West Berlin. Along with his fellow celestial being, Cassiel, he spends his days and nights observing the behaviour of the city’s human populace and listening to their thoughts. While their presence provides a vague comfort to the people, the angels generally can’t be seen or heard by humans and are unable to physically interact with the world. Not content with being an eternal witness to the universe, Damiel eventually decides to take physical, mortal form.

The plot, however, is never the main focus of the film. Usually via the point of view of the two angels, the film omnisciently, empathetically drifts from one worried inhabitant of Berlin to the next, to the point where the divided city itself could perhaps be considered the film’s main character. Inner monologues inspired by the work of German poet Rainer Maria Rilke are heard, often as brief snippets, and provide worthy accompaniment to Henri Alekan’s serenely beautiful cinematography. Frequently visited individuals include Marion, the lonely circus trapeze artist who unknowingly wins Damiel’s heart, and Peter Falk, the “Columbo” actor warmly playing himself and providing some welcome moments of humour.

The ambitious picture that Wenders creates from these smaller parts will change in meaning from viewer to viewer (and viewing to viewing) but the film’s universal themes allow anyone to connect with the work in their own personal way. That being said, Wenders seems aware that a large proportion of the film’s audience will be residents of the ivory tower of cinephilia and he makes a point of underscoring the parallels between these well-read viewers and the knowledgeable angels who study society as outside observers. An aged storyteller contemplates the closed-off nature of his readers, “They no longer sit in a circle, but apart. And one doesn’t know anything about the other.” Trapeze artist Marion later boldly declares as she stares directly into the camera, “I am ready. Now it’s your turn. You hold the game in your hand. Now or never.” In its thoughtful celebration of human experience and interaction, Wings of Desire distinguishes itself as an art house film that challenges its audience to get out of the art house and start living.
Like this Review?
Write your own review?
DooVOTE
Not for me
Like this Review?
Write your own review?
COMMENTS 0
Your Comment...