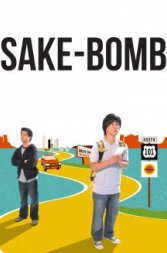 Sake-Bomb
Japan, USA, 2013, 83 minutes, SD Comedy, Asian, Road Movie, US Indie
Simply filmed but with important issues that anybody could relate to whether they're Asian, American or any other nationality.  Two cousins are on a road trip to search for a lady in San Francisco,  the result is devastating for Naoto (Hamada) but he manages to accept the truth and move on. Sebastian, his  westernized cousin who speaks English well, doesn't have a decent job and spends his days making Vlogs and ranting about racism and everything is a very interesting character. While Naoto is calm and composed, Sebastian seems to be rebellious and angry of just about anything and his video blogs talk of things that are actually the opposite of what he is.  When the cold truth was slapped on his face, he somehow realizes that he must go beyond the lies and deception and be the real person that he is.  It's like being hit head-on by sake-bomb, or  being knocked out when the sake-bomb effect hits you. Hilarious and engaging,  this is a must-watch!
Like this Review?
Write your own review?
DooVOTE
Not for me
Like this Review?
Write your own review?
COMMENTS 0
Your Comment...