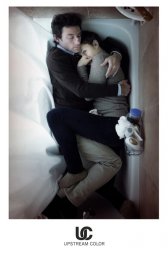 For all science fiction movies have managed to become in the last decades – bigger, broader, better – there’s an adjective that’s too often missing from the descriptions of this genre: poetic.

To reverse this trend we find the fatigues of one-man-show writer/director (and practically everything else) Shane Carruth. His debut film, Primer (2004), anticipated his streak for abstraction with a complex, super low budget time travel tale. With his second movie, Upstream Colour (2013), he has stepped up the game and brought us a dreamlike, visually stunning story of loss and survival.

The science fiction element in the movie – an eternal parasitic round worm that travels from human, to pigs, to orchids and back – it’s quite intriguing in itself, but it’s the storytelling process that it’s the most fascinating. Scarce on dialogue but richly textured on sound, the film releases information with frugality, each step unlocking a mystery of three or four scenes before.

Amy Seimetz (a face borrowed from TV) plays Kris, a recovering ex-host whose life has been shattered by the experience, and is soon joined on screen by Carruth (as Jeff), a fellow victim that shares with her a mysterious bond. Their expressions and reaction to the world, their search for answers and meaning are the map that leads to the sense of the film.

Upstream Colour has been said to resemble Terrence Malick‘s Tree of Life, but if they share the bleached, overexposed coloring and some narrative techniques, Carruth’s work is void of the self-indulgence and pretentiousness of Tree of Life, and presents instead a world whose complexity and oddity wash over us as unsettling but fascinating waves of otherliness.

With Upstream Colour Carruth has managed to convince the indie scene that he’s not a once-in-a-life-time prodigy and that his unique voice can be carried from one film to another. A third work, The Modern Ocean, seems to be next on the filmmaker’s list and even if I try not to raise my expectations it’s hard not to wonder what he’ll cook up this time to keep us so hypnotized and entertained.
Like this Review?
Write your own review?
DooVOTE
Not for me
Like this Review?
Write your own review?
COMMENTS 0
Your Comment...