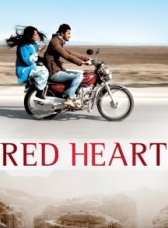 Red Heart
Iraq, 2012, 78 minutes, SD Drama, Romance, Arthouse
Just how much suffering can a woman take? The character of Shirin moved me because she had to go through so much; being raped, abandoned, impregnated and left to beg on the streets.  This succession of horrible events in her life couldn't have happened had she heed her father's wish to marry another man, but she chose her heart.  Unfortunately, the man she loves was unable to help her through the most trying times of her life.  Prison was her last resort so she can have food to eat and a roof on her head. There is an evident discrimination with unmarried women who bore a child in the place as depicted in the film.  There were some scenes where I wanted to cry foul, such as that scene wherein her boyfriend Soran visited her and upon seeing her very pregnant with child left immediately,  not waiting for any explanation why she became pregnant. In a way,  viewers will come to realize that maybe the negative things that happened were in a way Sirin's punishment, for disobeying her father. A touching and moving film that  will raise a lot of questions in your mind, especially on the issues concerning women.  Check it out and find out what became of Sirin and if this very sad and emotional story has a happy ending.
Like this Review?
Write your own review?
DooVOTE
Not for me
Like this Review?
Write your own review?
COMMENTS 0
Your Comment...