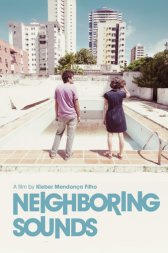 Neighboring Sounds
Brazil, 2012, 131 minutes Drama, Thriller, Drama
Neighbouring Sounds (O Som Ao Redor in Portuguese) is one of my favourite films of 2013. It is an excellent debut feature by film critic Kleber Mendonça Filho, which was selected as the Brazilian submission in theforeign-language race for the 86th Academy Awards. In this three part social melodrama we follow the everyday life of middle class families and the servants who work for them in a wealthy suburb of Recife. I like the way Klebert approaches his film like an horror movie, putting sound at the centre of it. Sirens, drills, hurrying footsteps , bumps, the surrounding noise slowly becomes source of fear. You can feel something is out there, something sinsiter is preparing and tension slowly builds up until the last scene, when all of it is revealed. I can't help thinking of another great debut film By Argentinian director Lucrecia Martel "The Swamp", another representation of middle class malaise, using great sound effect and plotless story with unavoidable drama.
Like this Review?
Write your own review?
DooVOTE
Not for me
Like this Review?
Write your own review?
COMMENTS 0
Your Comment...