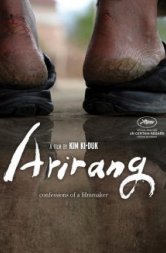 Arirang
South Korea, 2011, 100 minutes, SD Documentary, Asian, Arthouse
This is a film that will give viewers the realization that no matter how famous and renowned a person is, he experiences depression and downfalls, like everyone else.  In this case, it's Director Kim ki-duk, the renowned and multi-awarded South Korean film-maker famous for films like Moebius and Spring, Summer,Fall, Winter..and Spring, among others and recipient of various international awards from Venice, Berlin and Cannes Film Festivals. One would wonder what could make a genius filmmaker like him bend and waver? A traumatic experience while shooting the Dreams movie is said to be the reason and viewers can't help but empathize with what he has to go through.  I am in a way intrigued with the film's title and found out that it's a Korean folk song of sorts but that, it's also a term synonymous with suffering. Truly, the filmmaker suffered internally because of the incident and the film, while it documents his journey to self-therapy is also a reminder for us all;  we are all capable of suffering and our characters undergo tests but it is in confronting these traumas and trials that we can learn so much and hopefully become better, renewed and refreshed, in a way,  just like what Kim ki-duk had to go through.
Like this Review?
Write your own review?
DooVOTE
Not for me
Like this Review?
Write your own review?
COMMENTS 0
Your Comment...