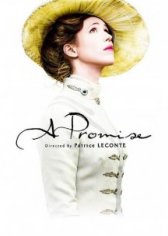 A Promise
France, Germany, 2013, 94 minutes, HD Drama, Romance
This film tackles forbidden romance and the conflicts that go with it. Quite an uncomfortable situation to be in, to be falling for your boss' wife and you're living right in their own home. In some ways there's a sense of betrayal to think that Friedrich is Karl Hoffmeister's most trusted employee. Somehow, in Friedrich' part he took advantage that Hoffmeister was weak and sickly and the wife was obviously attracted to him. But  more so, on the part of the wife, she was unwittingly not able to control her emotions and fell so easily for the man, despite the fact that her husband sees to it that she and the family is comfortable and living lavishly. In the truest sense, this film takes a peek at human nature and viewers get to see unlikely scenarios as they unfold, and how the characters handled the situations. On Hoffmeister's part, he seems to have sensed the fondness between his wife and his protege', as indicated by one scene where he's seen looking down at them from his window. As a dying man, he seems to prepare his wife for a prospect partner, should he die anytime. The scenarios are quite unconventional but I find it very interesting,  especially since it's the notable Alan Rickman on the lead role. Unfathomable but very intense, better check this out!
Like this Review?
Write your own review?
DooVOTE
Not for me
Like this Review?
Write your own review?
COMMENTS 0
Your Comment...