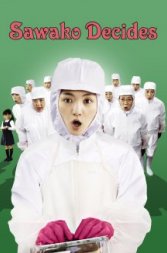 Sawako Decides
Japan, 2010, 112 minutes Drama, Asian
I was highly entertained by this film, it had a couple of comedic scenes. I particularly liked that scene where Sawako and the factory workers were singing their new company song, it had me laughing so hard. The story of Sawako will make viewers hate her at first but will love her by the end of the movie, as she becomes the strong-willed woman, so unlike the indecisive woman who seems to accept anything life has to give her at the start of the film. The little girl is so like her, in many ways; motherless and needing motherly love. Seeing this Yuya Ishii film reminds me of certain ideas in his other film "Mitsuko Delivers", in particular that which is "cool", which was also a central idea on the said movie. This film gives essential messages in terms of father-daughter love, finding yourself and more so, when it comes to judging another person on just the merit of gossip and hearsay. When Sawako spoke out to the factory workers about her past and challenged who among them will cast a stone on her, I remembered that passage from the Bible that said, "let those with no sin cast the first stone".  Some scenes may be too dragging for some viewers but I still would recommend this, more so because Hikari Mitsushima delivers a commendable performance as the foxy Sawako.
Like this Review?
Write your own review?
DooVOTE
Not for me
Like this Review?
Write your own review?
COMMENTS 0
Your Comment...