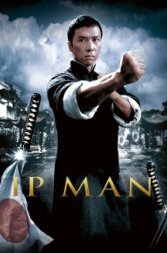 Ip Man
Hong Kong, 2008, 108 minutes, HD Action, History, Asian, Sport
Bruce Lee’s legacy has created a separate movie genre in Martial Arts. Yes we’ve seen old Chinese and other movies competing for attention but the likes of Jackie Chan, Tony Jaa of Thailand and Jet Li and now Donnie Yen, are what sets post millennium martial arts films apart from other action movies. And in the realistic martial arts genre, i would say that Donnie Yen leads the pack. Ip Man’s setting is during the Japanese occupation of China. He turns down the Japanese offer for him to train Japanese soldiers.  This leads to him being challenged to face them in a tournament that the Japanese have put together but eventually, for the sake of friends and family, and for national pride, he stands up, accepts the challenge and faces his enemies with rapid punches in what would be some of the most unforgettable fighting scenes in world cinema. Donnie Yen does not have an imposing presence like say Schwarzenegger or Stallone but his dead serious stare is fearsome for even the likes of Mike Tyson. He does not have a Hollywood look nor tattoos to prove his red-bloodied-ness but he has that commanding stature that his enemies respect. His fighting skills are beyond acting..they are real because Donnie is a true martial artist aside from being just an actor, producer, director and action choreographer. He’s won world wushu tournaments many times. He is also well versed in many forms of Martial Arts including Tai Chi, boxing, jeet kune do, taekwondo, Muay Thai, Brazilian Jiu-Jitsu, and Wing Chun.
Like this Review?
Write your own review?
DooVOTE
Not for me
Like this Review?
Write your own review?
COMMENTS 0
Your Comment...