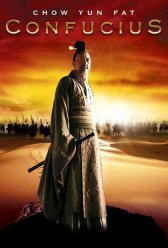 Confucius
China, 2010, 125 minutes, SD History, Biopic, Asian
China is a land caught at the threshold that lies between hubris and repressed civility in this movie by Hu Mei who grouped together superb and world-class artists to represent the issues of brotherhood, power, intimacy, courage, politics, education and civility in the chaotic China of the sixth century BC.  Politics, wars and greedy ambition divided the country and sought control of the liberties of the people. Kong Qui (Confucius), a commoner, lived a full but difficult life. Having proven himself as an expert military strategist, he created political alliances, gained control of various territories, and protected the royalty with minimum costs. His land of Lu greatly benefited by his wise counsel which was based mostly on how man must govern himself which to him is by righteousness, always giving importance to family, tradition, social philosophies and interactions, compassion, virtue, propriety, and always emphasizing on what unites rather than one what divides. Confucius gave importance to the six arts: archery, calligraphy, computation, music, chariot driving, and ritual espousing the need for education because, to him, education would give the people a chance to live within the circle of tradition and benevolence in society. He felt that his teachings weren’t appreciated during his time and that is why he summarized his wisdom in his book Spring and Autumn Annals hoping that future generations will come to appreciate the wisdom that he sought to impart. Hu Mei created a monumental film of a man who's wisdom surpassed the ages.
Like this Review?
Write your own review?
DooVOTE
Not for me
Like this Review?
Write your own review?
COMMENTS 0
Your Comment...