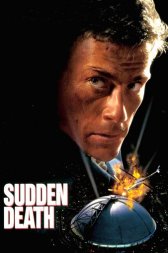 Sudden Death
USA, 1995, 106 minutes Action
Oh blimey. I'm glad I watched The Relic, another Peter Hyams film, before this one, because they are practically the same movie (except one has a giant lizard in it). The cocktail bomb, the aerial shots of helicopters, the red lightbulbs, the mass panic, the John Debney score, the supporting cast... I could go on. The Relic is practically a carbon copy of this. However, even though this one had just as many thrills and spills (and which I actually found MORE violent) ,I didn't like this one as much. Perhaps it's Van Damme, or the OTT violence, or the scrappiness of the editing, it just didn't have the slickness or the imagination of The Relic. Still good fun though.
Like this Review?
Write your own review?
DooVOTE
Not for me
Like this Review?
Write your own review?
COMMENTS 1
Your Comment...
LIKES 3
kavy
blacksnakemoan
snakeeyes
kavy
blacksnakemoan
snakeeyes