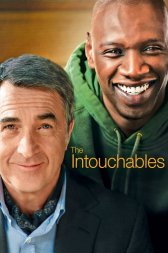 Intouchables
France, 2011, 112 minutes Comedy, Drama
Inspired by a true story, “The Intouchables” talks about Philippe (played by François Cluzet), a rich quadriplegic who needs a male nurse and is looking for candidates. Driss, who just came in for a check to be signed, grabs Philippe’s attention and gets hired. Driss is not interested at first, but after a month trial, he ends up liking the job and he becomes closer to Philippe to the point that they become real buddies.

Normally a film dealing with such a delicate issue as quadriplegia would focus on the drama and the seriousness of the event, but what makes this film different is that it’s not about tragedy. For once we’re actually allowed to have fun with the characters! This story is much more about the friendship between two almost entire opposites and how things such as race, social status or even disability can’t get in the way between them. They have great chemistry, seeing how it’s a very honest friendship too.

Philippe is so drawn to Driss because, since the day they met, he never saw a handicapped man. Even when it’s brought up, Driss doesn’t try to act too sorry or with pity like others normally would: it’s only an afterthought to him. And Philippe loves that.

Driss is extremely likeable and very relatable. Initially he’s not interested in solving anyone’s problems, but he begins to care about Philippe and realize how much of an influence he can be to others. He also doesn’t respond too well to Philippe’s taste in high art, although Philippe finds amusement in his reactions, but he’s also allowed to share some of his own taste in music and style.

It’s that accepting people for who they are, and even learning a bit from each other’s differences, which drives their friendship forward. The film also manages to perfectly balance out its seriousness and drama with its light-heartedness, which makes us care for them even more.

“The Intouchables” is a great film, with a phenomenal soundtrack, loveable and funny characters, a touching story with an uplifting and inspiring message.