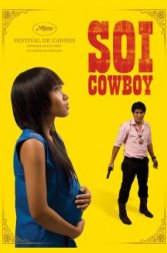 Soi Cowboy
Thailand, UK, 2008, 117 minutes, HD Drama, Asian, Arthouse
Fascinating and dramatic! Soi Cowboy takes viewers on an hallucinatory ride concerning foreigners in Thailand and about a woman's quest for security as well as the issues of  love and also, murder.  Director Clay masterfully takes us scene after scene with this film that has gained nominations from various award-giving bodies including Cannes. While it revolves around a Westerner and his Thai gf it also gives viewers a peek of the goings-on in Thai's red district including Soi Cowboy.  Touted as an intelligent flick from a rising filmmaker, the flick is also an intense drama that is mysterious with commendable cinematography.  Worth checking out!
Like this Review?
Write your own review?
DooVOTE
Not for me
Like this Review?
Write your own review?
COMMENTS 0
Your Comment...
LIKES 2
lenidecastro
marygracedimala
lenidecastro
marygracedimala