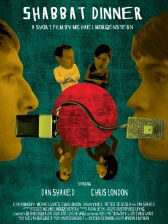 Shabbat Dinner
USA, 2012, 14 minutes LGBT
Engaging and impressive acting!  William seems to be at ease with his sexuality  until he met Virgo, they got into a discussion of personal issues and Virgo confides that he's gay.  What follows is a sort of experimentation for William that he eventually admitted as being "cool".  While the parents discuss about religion and other things the two guys make out but was later discovered by William's father.  What started as a dinner ended in  lessons of self-discovery and coming out.  Great performers and actors, this is worth the watch.
Like this Review?
Write your own review?
Add to List
Not for me
Like this Review?
Write your own review?
COMMENTS 0
Your Comment...