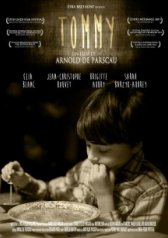 Tommy
France, 2011, 9 minutes Horror
There's a queer kind of twistedness at play in this film.  The shots are impressive and while there are moments when viewers will question their own ability to fully grasp the meaning of it all,  what the scenes suggest, from the vantage point of the child, will give a hint.  The harsh way his father admonishes his mom, the malicious way his father looks into the bosom of the daughter: these scenes give an inkling on what's on the child's mind. There was no sign of anger or repulsion, in fact, the child, when questioned why he killed his father, doesn't seem to know the reason why he did it.  Viewers are left to their own presumptions.  There are scenes that will confuse us, true, but in totality, it all add up to the elements that the film wish to convey: confusion,  hallucination and bloodiness, among others.
Like this Review?
Write your own review?
Add to List
Not for me
Like this Review?
Write your own review?
COMMENTS 0
Your Comment...