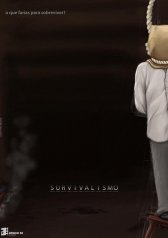 Survivalismo
Portugal, 2011, 9 minutes Horror
I gave this film a 4 stars because of the catchy plot.  At first,  you'll find yourself quite bored and the scene seems to drag but when the man starts recalling the bad things that he did, that's when the  adrenalin rush begins!  So, while he' s certain that he has a slim chance to live, he  narrates the affair he has with his girlfriend's best friend  who also happens to be the girlfriend of his best friend.  Tough coincidences,  I'd say. Adding fuel to the fire was his admittance that he killed his best friend's brother.  When he falls, you'd think it's the end of him but voila! There's the twist, he sure got an impressive audience and you'll know who they are, that's for sure!  The title was indeed catchy, too, and film scoring was laudable enough. Do check this out, folks!
Like this Review?
Write your own review?
Add to List
Not for me
Like this Review?
Write your own review?
COMMENTS 0
Your Comment...