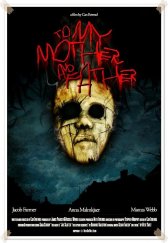 To My Mother and Father
UK, Turkey, 2010, 9 minutes Horror
This is one of those times when  I can't quite put two and two together, especially when it comes to the horror genre.  But in a way,  the twistedness and the morbidness somehow makes this film  unique, one that you can really say with conviction that, " yes this is horror", because there is a level of ambiguity that seeks not for one to comprehend, but to take it as just what it is.  The child's witnessing to a carnal act seems to be the triggering point here and the mask per se could indicate a deeper meaning. While the child's motive was to scare the parents,  he was himself scared out of his wits by the things he witnessed, and somehow transforms him to become a baby-eating creature and in the process killing the mother, too.  Much as I would like to think the mask was a possessed/ demonic thing,  I would also like to acknowledge the idea that the baby-eating scene was a  kind of symbolism in itself.  So this is the horror genre,  everything need not be explained and one is entitled to their convictions.  Acting was laudable and realistic, cinematography and scoring commendable. This is worth checking out!
Like this Review?
Write your own review?
Add to List
Not for me
Like this Review?
Write your own review?
COMMENTS 0
Your Comment...