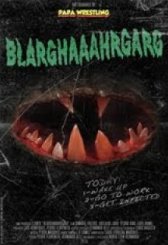 Blarghaaahrgarg
Portugal, 2010, 15 minutes Comedy, Horror
Can't help but shake my head in disbelief with this film!  Funny, yes ; scary,  yes mainly because of the blood and gore but this is quite taking things irrationally.  As a viewer,  you sometimes feel belittled.  There's this scene where the grandma gets eaten as well when she comes near to pull the cat off the garbage monster's mouth. You can't help but question, why would she do that?  She's a good distance away from it and yet she chose to go near and try to get the cat when it's futile considering what's left is only its tail and feet, so the grandma ends up getting eaten as well.  The lead actor vows to kill the monster, complete with the preparation ritual, and yet boom,  he gets hit by what remains of a TV and goes to sleep.  Enough of his plan to exterminate the monster.  And so the garbage monster reigns, extro to long shot, THE END.  Honestly,  I felt kinda weird watching the film and as a viewer you are challenged beyond reason.  What can viewers learn from this film?  To be careful when you're around chemicals and uncommon ingredients especially in a  laboratory simply because it could make a monster out of your garbage can!
Like this Review?
Write your own review?
Add to List
Not for me
Like this Review?
Write your own review?
COMMENTS 0
Your Comment...