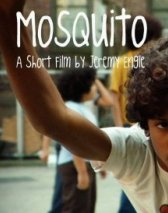 Mosquito
USA, 2010, 14 minutes Coming of Age
The film starts off as quite dull and dragging but later on viewers will appreciate Cesar's character.  This is somehow typical among young teeners who are trying to fit in with a group and trying their best to be accepted as who they really are.  The bullying and negativity he experienced earlier on  will change  when he did a rather heroic act of helping a group of  kids about to be abducted supposedly.   Acting can somehow be improved though but over all this film is still worth checking out.
Like this Review?
Write your own review?
Add to List
Not for me
Like this Review?
Write your own review?
COMMENTS 0
Your Comment...