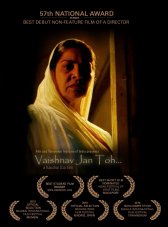 Vaishnav Jan Toh
India, 2009, 11 minutes Asian
Viewers unfamiliar with Gandhi's teachings will most likely find this film appalling. Set after a murder, the film's script does not explore the idea of justice at all. However, those familiar with Gandhi's teachings and the Hindu devotional song Vaishnav Jan Toh will see the moral sacrifice Ba took in the film. Faced with her own pain versus the troubles of a thief in hiding, Ba decides to shelter and help the latter. With excellent costumes and props, and believable acting, Vaishnav Jan Toh's message on compassion and morality gives it a solid 4 stars.
Like this Review?
Write your own review?
Add to List
Not for me
Like this Review?
Write your own review?
COMMENTS 0
Your Comment...