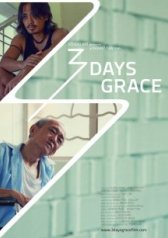 3 Days Grace
Singapore, 2011, 23 minutes Asian, Sport
I find this a very sad film, sad in the sense that until the end there was no forgiveness and reconciliation for father and son.  Particularly liked the acting of the son,  played by Sunny Pang,  you can see his grit and  toughness yet  you can feel that he has a soft core.  Despite of the harsh treatment he extends to his father,  there is that glint of pity and sadness in his eyes.  While the anger he feels for the father may be understandable,  it was not enough to see the father suffering as a stroke victim, for  the son to forgive the father.  The anger is so deep-set that it is terrifying to think about and something that can't be changed overnight.  Even as the son may be contemplating on forgiving his father,  there is still a gaping hole in his heart and this seems to manifest by way of that last scene where he is shown as  a child  hiding with a bruised cheek indicating abuse from his father.  This is worth watching  folks.
Like this Review?
Write your own review?
Add to List
Not for me
Like this Review?
Write your own review?
COMMENTS 0
Your Comment...