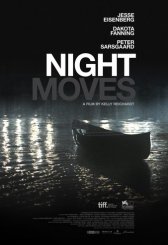 Night Moves
USA, 2013, 112 minutes Drama, Thriller
Acclaimed director Reichardt’s fifth feature film Night Moves stars Jesse Eisenberg, Dakota Fanning and Peter Saarsgard is a tense, suspenseful and nuanced story of three environmental activists from different backgrounds who execute a plan to blow up a hydroelectric dam then go their separate ways. Stylistically, the minimal dialogue and understated performances we know Reichardt favours from her past work like the Wendy and Lucy (2008) contributes vastly to a film that is, foremost, a visual delight.

The luscious natural landscape of mountainous Oregon is allowed to unfold in meditatively gradual yet narratively taut scenes as we follow the trio, who are trying to get to grips with some of the unexpected ethical and personal repercussions of their act of violence. With subtlety and precision, Reichardt poses many volatile questions with regards to radical activism, the legitimacy of violence, and the material and moral consequences of the vast power imbalances of the 21st century; Night Moves unsettles and intrigues in equal measure by refraining from answering, while allowing no room for disengagement.
Like this Review?
Write your own review?
DooVOTE
Not for me
Like this Review?
Write your own review?
COMMENTS 0
Your Comment...