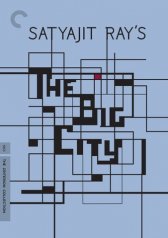 The Big City
India, 1963, 131 minutes Drama
Set in mid-fifties Calcutta, “Mahanagar”(The Big City) highlights certain taken-for-granted aspects of post-independence cultural and national change in India. Adapted from Narendranath Mitra’s short story, it follows protagonist Arati (Madhabi Mukherjee), an intelligent and resourceful housewife who leaves the domestic sphere to supplement the household income. This ends up being neither a descent nor an ascent in morality for Arati: Ray’s nuanced direction and narrative pacing gives room for the character herself to demonstrate that, although she thrives in her new job, she wants to share this success with her family. Work has neither “corrupted” nor “liberated” her: the tension for Arati is that the ways in which she can please others – husband, children, and in-laws – and please herself, are largely incompatible. This is a heartfelt and subtle film from Bengali Satyajit Ray, one of the master auteurs of world cinema influenced by the French New Wave.
Like this Review?
Write your own review?
DooVOTE
Not for me
Like this Review?
Write your own review?
COMMENTS 0
Your Comment...