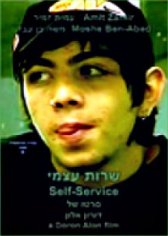 Self Service
Israel, 2008, 8 minutes LGBT, Drama
Sometimes  things can  happen spontaneously at any time, any moment, even while you're on the launderette.  Such was what transpired between Idan and Mike.  It only took a few  seconds of  exchanged looks and light banter before engaging in a sexual encounter.  Of course, viewers will ultimately understand that it is Mike's way of life but nevertheless one can't help but be amazed with the speed of how things transpired.  I particularly liked that intimate scene with the shadows and  with background voices from a television  that seem to drown all other sounds.  Also, that close up shot of Mike's face during the said intimate scene, showing disdain for himself, for the act, for everything else. that's going  on in his mind.  These are harrowing realities in the world, of men and women offering their bodies, in exchange of money; a way of life,  a way to feed themselves and their families , a way of rebellion, among other things.  Cinematography is commendable, this is definitely a must-watch.
Like this Review?
Write your own review?
Add to List
Not for me
Like this Review?
Write your own review?
COMMENTS 0
Your Comment...