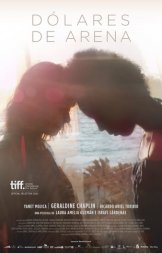 Sand Dollars
Dominican Republic, 2014, 85 minutes Drama
Sand Dollars (2014) is a delicate and heart breakingrnportrayal of a relationship between two women that defies our judgements and isrntestament to the fact that love manifests in many ways. Directed and written byrnLaura Amelia Guzman & Israel Cardenas, Sand Dollars is the best film torncome from the husband and wife duo as of yet, and tells a story of love and lonelinessrnon the dreamy shores of the Dominican Republic. rnrn The narrative itself is simple and subtle. A young Dominicanrnwoman, Noeli (Yanet Mojica), who is caught up in a life of sex tourism isrnforced to make money the only way she knows how. One of the lovers she hasrntaken is Anne (Geraldine Chaplin)- an aging French lady who has fallen madly inrnlove with her. The film flits between cocktail infused nights of dancing, andrnsun washed scenes in the tropical outdoors, all the while underpinned by thernquestion of whether Noeli will choose to be with Anne or her boyfriend Yeremirn(Ricardo Ariel Toribio). rnrn While the story is simple, it is certainly not basic. Therncomplexities of the love between Noeli and Anne unfold in ways that deny anyrnjudgement we may place on these two women. At times Noeli is a manipulative moneyrnmaker who exploits a woman who loves her, yet at times she is a vulnerablernyoung girl who is making a living in a hostile world. Likewise, there arernmoments when the camera brings to light the glaring age disparity between therntwo women, making us question if we should blame Anne for taking advantage of arnyoung girl, but at times the pain, loneliness and love in her eyes make itrnimpossible to cast judgement. As the story develops, our expectations and ourrnopinions of these two characters are consistently being brought into questionrnand we are forced to recognise that this film is about more than thernexploitative world of sex tourism.    rnrn In fact, both women need each other in their individual waysrnand that is what Guzman & Cardenas communicate so beautifully. Neitherrnwoman is naïve enough to believe they would be in this situation if money werernnot at play. Yet, money is simultaneously not the only reason why they continuernto be drawn to each other. Through out the film we get the sense that Noeli hasrngrown to love her companion and protector- maybe not in the same way she lovesrnYeremi, but in an entirely different way. To relay the age-old cliché, Noeli lovesrnbut she is not in love.  rnrn If there is one thing that stood alone in this film it isrnGeraldine Chaplin’s performance as the aging Anne. Chaplin brings the characterrnto life and, while we are told very little about her home life or past, we feelrnas though we understand the pain and loneliness that Anne is burying. Whetherrnit is drinking, delving too deep into the currents of the ocean, or sleepingrnwith a girl 40 years her junior, Anne simply wants to feel something. Chaplin’srneyes tell a story in Sand Dollars, and without her heart breaking and rawrncharacterisation, the film would not be anywhere near as poignant as it is.rnrn What Guzman and Cardenas have given us in Sand Dollars is arnstory of love in an unlikely place. It’s not a story of exploitation, orrnromance, or even unrequited love, but it is a story of mutual need, of pain,rnand of the universal need to fill certain voids in our lives. This is a filmrnthat will undermine the stereotypes you might heap onto it, and in doing so, itrnwill remind you that people are rarely as simple as they seem.
Like this Review?
Write your own review?
DooVOTE
Not for me
Like this Review?
Write your own review?
COMMENTS 0
Your Comment...
LIKES 1
dpountain
dpountain