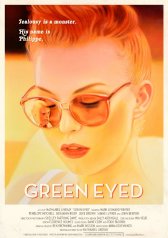 Green Eyed
Australia, 2012, 16 minutes Horror
The short film tends to drag at some point but it does have some great visuals and musical scoring.  The lead actor seems to be taunted with this ghoul-faced man who becomes part of his social circle with no plan of leaving. The man obviously won the hearts of his friends and significant other and slowly he develops hatred for this intruder to the point that he intends to kill him.  The film tries to convey the notion of one's own insecurities and  how,  instead of bettering oneself,  we tend to put the blame on other people.  While the intrusion of the ghoul-faced man may not be intentional, the lead actor saw it as a sabotage on his part, even as it wasn't really the case.
Like this Review?
Write your own review?
Add to List
Not for me
Like this Review?
Write your own review?
COMMENTS 0
Your Comment...