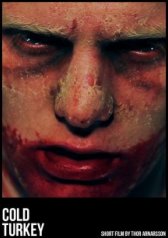 Cold Turkey
Iceland, 2013, 15 minutes Horror
I almost gave up watching this film because of the blood and the entire idea of cannibalism.  But as I begin to see through the lines,  there is a vital message  for all regarding addiction, as a whole. We all have our addictions but the manner of control and  resolution  is what matters more.  As depicted in the film, the youngster had a hard time fighting from his monstrous addiction because his system has gotten used to it.  Had there been someone to help him,it would have a rather diferent ending.  I noticed there was no family or parents around him.   Nonetheless,  Hlodversson's acting was commendable and the musical scoring is laudable.
Like this Review?
Write your own review?
Add to List
Not for me
Like this Review?
Write your own review?
COMMENTS 0
Your Comment...