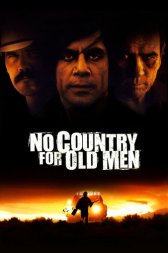 No Country for Old Men
USA, 2007, 122 minutes Crime, Drama, Thriller, Thriller, Noir
An excellent film by the Coen brothers, showcasing some superb acting talent against the stark backdrop of the American southwest.

Josh Brolin, a much underrated actor, plays a brooding and tough man trying to make the most of an opportunity. Texan Tommy Lee Jones is in his element as a sherrif trying to capture a serial killer (Jarvier Bardem).