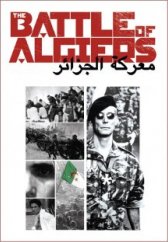 The Battle of Algiers
Algeria, Italy, 1966, 121 minutes, HD History, War, African, Classics
This classic film is about to celebrate its 50th anniversary this year. The Battle of Algiers is Gillo Pontecorvo’s 1966 recounting of, and tribute to, the Algerian war of independence. Shot on location mere years after the violent struggle with French colonialism, the Algerian-Italian production focuses on the years 1954 to 1957, when guerrilla warfare between the National Liberation Front (FLN) and the French colonial armed forces for control of Algiers was at its most brutal. As well as a dramatization of a crucial period of Algerian history, Pontecorvo’s film is in many ways also a complex exploration of the nature, uses and limits of violence. Shot with a documentarian impulse, in a newsreel style, we begin and end with the perspective of the fictional petty-criminal-turned-revolutionary Ali La Pointe. The screenplay was written by Saadi Yacef, one of the leaders of the FLN during the war of independence, draws from real historical figures to inspire characters in the film. Both sides match one another in their unforgiving tactics as the struggle to claim the capital continues. In this accomplished exploration of a complex historical period, The Battle of Algiers manages to represent the paradox that is a dialectic of violence, seemingly propelling historical events yet recreating its own conditions for existence through every manifestation.
Like this Review?
Write your own review?
DooVOTE
Not for me
Like this Review?
Write your own review?
COMMENTS 0
Your Comment...
LIKES 1
blacksnakemoan
blacksnakemoan