Enter your email and be the first
to receive recommended great films
from around the world!
Spam
A moderator has been alerted
Close
Delete Comment
Are you sure you want to delete this comment?
Cancel Delete
FILM NOT YET AVAILABLE ON FILMDOO IN United States of America

Some movies are not yet available on FilmDoo in United States of America.
Let film makers know you want to see their film.

Help us bring this movie to you by clicking DooVOTE!

Do not show this message again.
WANT TO WATCH THIS FILM?

Start Watching!Rent this film for only $0.00!

We will let you know once Boys On Film 4: Protect Me From What I Want is available to watch where you are

Boys On Film 4: Protect Me From What I Want will now be on your WATCHLIST when you go to MY HISTORY on your VIEW PROFILE page.

SEE LATEST FILMS
Not for me
Add to DooVOTE 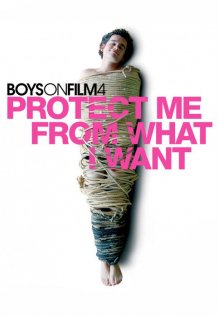 Boys On Film 4: Protect Me From What I Want

Want to see this?

Steam Dir. Eldar Rapaport (USA) 15mins. Winner of the Iris Prize 2009 - Starring Julien Zeitouni, Scott Hislop - Moving between anxiety, reflection and fear, two strangers try to make sense of their predicament...stuck in a steam room. Heat increasing, they need to get out but can't find the door. What is this place and how did they get here?


Protect Me From What I Want Dir. Dominic Leclerc (UK) 14mins. Starring Elliott Tittensor, Naveed Choudhury - Daz is looking for love. Saleem is looking for sex. Cruising at an underground archway, these two worlds collide. Back at Daz' bedsit, Saleem embarks on a dangerous, thrilling sexual adventure. Both characters disparate worlds overlap and collide to tell a tale of loneliness and longing in a city late at night.


Postmortem Dir. Eldar Rapaport (USA) 16mins. Starring Murray Bartlett, Daniel Dugan - Romanticized as a fruit of desire and imagination, Postmortem plays out as a fleeting moment between two men who briefly reunite to reminisce and unload.


My Name Is Love Dir. David Färdmar (Sweden) 20mins. Starring Adam Lundgren, Jonas Rimeika - Love and Sebastian meet each other by a coincidence on a hot Swedish summer night. They happen to share the same secret, but their encounter is going to cause severe consequences for both of them - Special Mention, Iris Prize

Wrestling Dir. Grimur Hakonarson (Iceland) 21mins. Starring Halldór Gylfason, Björn Ingi Hilmarsson - Denni and Einar both practice the sport of Icelandic wrestling, which allows them to escape their daily routine, to express their true selves. Yet little do the wrestling spectators know, the men harbour a secret passion for each other. - Official Selection, Sundance Film Festival


Trevor Dir. Peggy Rajski (USA) 23mins. Starring Brett Barsky, Cory Miller, Judy Kain - Trevor is a film that deals with the very real issue of one's self worth in the eyes of the people that matter in your life. It takes a sensitive yet blunt approach to suicide. It deals with a young boy's thoughts about his sexuality at a very important stage of his life. There s a little bit of Trevor in all of us. With a soundtrack featuring a bevy of songs from Diana Ross, Trevor is an uplifting and fulfilling cinematic experience. - Winner Academy Award (Oscar), Winner Teddy Award Berlin.