We will let you know once Boys On Film 13: Trick & Treat is available to watch where you are

Boys On Film 13: Trick & Treat will now be on your WATCHLIST when you go to MY HISTORY on your VIEW PROFILE page. 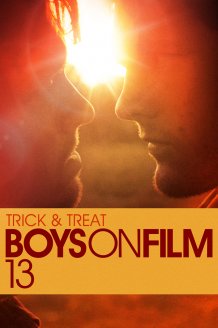 Boygame, dir. Anna Nolskog (Sweden) - Best friends John and Nicolas aren't confident about having sex with girls, so to avoid embarrassment; they decide to get some practice on each other.


Remission, dir. Christopher Brown (UK) - Two young men and a boy roam the overgrown English countryside, seeking to escape a deadly virus. The two men are forced to take a horrific decision after the boy's behaviour puts them in increasing danger, but is it too late to cheat death?


Caged, dir. Lazlo and Dylan Tonk (Netherlands) - David and Neils spend most of their time working out together on the local sports ground. Meanwhile their gang of friends harass a local boy for being gay. But their tight friendship is about to be thrown off balance by a secret Neils has been keeping.


Middle Man, dir. Charlie Francis (UK) - After a misunderstanding, Nathan tries to get in contact with his hearing impaired boyfriend through a type-to-talk service. Will the middle man be able to fix the situation or will Nathan have to find another way to communicate?


VIS-A-VIS, dir. Dan Connolly (Australia) - When a government official comes to inspect Richard and Martin's relationship for visa approval, it is clear that all is not as it seems. Cue hilarious consequences as the two men will stop at nothing to hide their true identity. Will Martin get visa approval or will things turn out for the worst?


A Last Farewell, dir. Casper Andreas (Sweden) - A Last Farewell looks at an aging author's sorrow over the death of his long-term partner. Haunted by visions of his late husband, and in conflict with his daughter who is trying to renew the ties between them, how will he move on and find peace?


Mirrors, dir. Neil Ely (UK) - In a toilet of a Manchester nightclub, two young men (SHAMELESS' Jody Latham and SKINS' Liam Boyle) catch each other's eye. As they reveal their feelings to one another, they find that their lives mirror each other in more ways than one. The only thing left to do is face the person staring back at them.


Followers, dir. Tim Marshall (UK/Australia) - When an elderly woman sees a vision of Jesus on the swimming trunks of a young African man at her class, she befriends him as she believes God has sent her a sign for him to free her of her loneliness.


Kissing Drew, dir. Philip J. Connell (Canada) - A dreary school day in 1992: 'Cool kid' Drew is James' sexual fantasy, but Drew is also James' bully. In a single moment, James faces off against both Drew the bully and Drew the fantasy, but is it enough to reclaim his dignity?


Surprise, dir. Leslie Bumgarner (Canada) - After misbehaving at school it's time for young Jack to confess to his mother, but the solution to his 'problem' is not like anything he could have imagined.